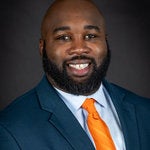 Louis H. Thomas III is a trial associate at Kiefer & Kiefer. He specializes in civil defense and personal injury litigation. He has not only received favorable bench trial verdicts, but he also has extensive motion practice experience. He is consistently able to deliver excellent results for his clients. He is licensed to practice law in all state courts of Louisiana, as well as the United States District Court for the Eastern District of Louisiana.

Before joining Kiefer & Kiefer, Louis gained a great deal of civil defense insight working as in-house counsel for an insurance company. Prior to that, he developed his litigation skills as a litigation associate at a private defense firm where he worked on various types of civil defense cases including automobile accidents, premises liability, and employer liability. Prior to the practice of law, Louis worked in industries related to financial services, construction, and government contracting. He has also worked within local Parish government.

Louis graduated from Loyola University New Orleans College of Law in 2016, where he received a Certificate in Law, Technology & Entrepreneurship. There, he served as the president of the Real Estate Law Society and worked as a student practitioner in criminal defense in the Stuart H. Smith Law Clinic and Center for Social Justice. He obtained a B.S.M. in Finance from Tulane University's A.B. Freeman School of Business in 2007. While at Tulane, Louis was the recipient of the Tulane Athletics Scholarship as a football player. He remains an active member of Tulane Letterwinners' Association and a Tulane Football season ticket holder.